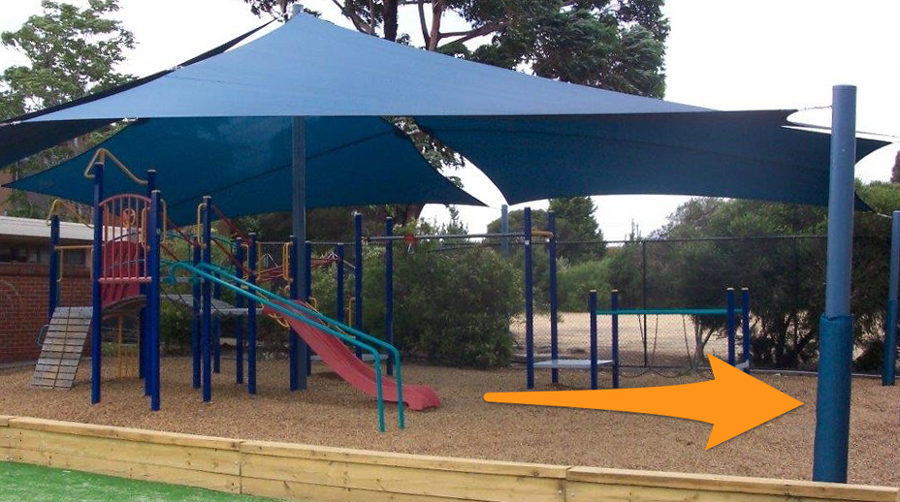 We take Shade Sail Safety very seriously.  Although the industry has had some bad press of late since the tragic death of the teenage son of a former footballer, Shade Sails are safe when used properly.

When designed, installed, maintained and serviced, Shade — combined with padded post protectors — are very safe for young children.   They undergo council checks and approvals to ensure that they are safe.  In fact, for all children Shade Sails provide protection from the hot sun and its harmful skin cancer causing UV rays.

Proper maintenance can help prevent these situations from happening.  Most commercial shade cloths carry a UV degradation quality of 10 years, so as the fabric gets closer to the end of its life it will become more vulnerable to misuse such as children climbing on the top of the sail.  The thread in sails may degrade quicker than the shade cloth and may need to be re-sewn during the life of the sail, which could be done in conjunction with cleaning.  One alternative to re-sewing of the sail is to use a pure expanded PTFE thread when the sail is initially made.  This is the thread that NASA choose for their space sails (because even the smallest weakness can have fatal consequences in space).  PTFE thread has written 15 year warranty which means it will most likely outlast the fabric it is sewn to.  There is additional costs in using expanded PTFE threads, but your project may warrant it.  For example if a school wanted to provide that extra bit of protection and extend the life of their playground sails.

However these situations should not be happening in the first place.  Shade Sails can sometimes be a target of teens in their wild years.  Almost all of the recently publicised incidents (which the media chosen to call freak accidents) involve teenagers pushing the Shade Sails beyond their specifications under the influence of alcohol.  There is nothing particularly freaky or accidental about it.  Part of it is also an education issue, not just for the children, but also the parents.  Shade Sails are not trampolines or hammocks (most children known this) and they should never have been climbed on to start with.  It is also sometimes an issue of planning and design in that Shade Sails being too close to roofs or other structures that make it too easy to climb onto and can tempt teenagers.

In this case, the biggest problem is not the Shade Sails or the school that has them installed, it is children not being properly supervised and drinking.  Jumping on Shade Sails is a little like jumping on a skylight but unsupervised children have done even more dangerous things.  The media beat up of Shade Sails really needs to be put in perspective.  Many children are seriously injured or die from accidents with cars and drugs.  Far more people die or are seriously ill from skin cancer (which Shade Sails protect against) than are in Shade Sail accidents.  So Shade Sails are very valuable assets for schools.

The Worksafe website has a section on Safe Design which points out that structures should be carefully designed based on the individual situation as well as being regularly checked and maintained — and this applies to shade sail structures.

We follow these regulations closely, carefully selecting the sites and building robust, safe Shade Sail structures.  Although most warranties do not cover misuse, in all of our years of trading, we have not seen a single incident with one of our Shade Sails.