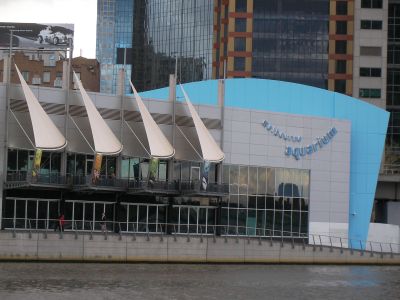 This week we feature Shade Sails in and around the Melbourne CBD and inner city areas of the City of Melbourne.  We service the entire metropolitan area and we get most of our work in the outer suburbs.  You might not think there are many Shade Sails in the city, but there are in fact quite a few applications for Shade Sails, even in built up areas where it is windy and there is less sun.  There is a big demand for CBD Shade Sails because CBD=cars and there is plenty of demand for solutions around car parking.

Our first stop is right next to the mighty Yarra River. What’s this you say? A Melbourne architectural landmark featuring Shade Sails?  Yes – it is the Melbourne Aquarium.

This major tourist icon features four large sails as part of its design.  Four cream coloured sails are attached to towering deliberately tall posts and a curved metal structure which is itself tensioned to the facade of the building with wires. While the sails have a definite aesthetic purpose, they are also very functional. They provide much needed shade from the morning and mid afternoon sun to patrons of the second level restaurant and cafe.

Our second stop is Louden Place, a laneway just off Swanston Street which forms an entryway to the Swanston Hotel.  A set of complex black shade sails has been stretched over a curved structure to create an attractive pattern.  The result is a canopy which virtually turns a laneway into an arcade providing shelter to pedestrians. 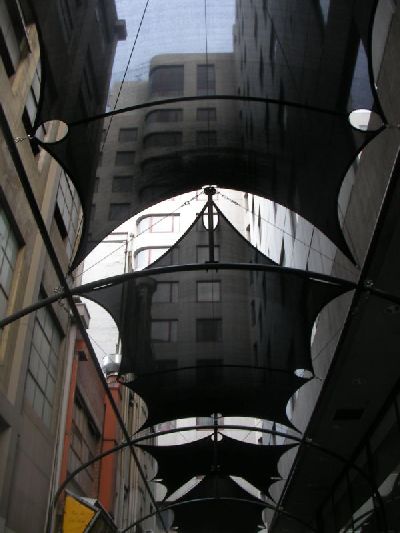 Compare to some of our walkway shade solutions.

Next stop is Queens Lane, just behind St Kilda Road.  This area is technically part of Melbourne (postcode 3004).  There are a few examples of Shade Sails here.

This early 1980s office building at 456 St Kilda Road has an exposed underground carpark.  A Shade Sail solution provides both weather protection (makes both a great wind break as well as provides some sun and rain shelter) for car owners.  A series of Shade Sails which is evenly spaced and identically sized gives the building a bit of a visual update as well.  The Shade Sails are anchored to an evenly spaced series of metal posts and the concrete facade of the building. 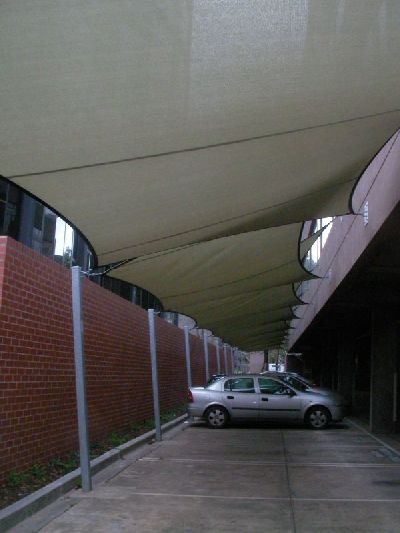 Compare to our car park Shade Sails as well as our commercial and architectural shade solutions.

This small cafe deck which above an underground cafe and is attached to a multi-storey car park facility behind 12 Queens Road on Queens Lane.  It is a simple but interesting design. The Shade Sails are fixed between the side of the carpark and posts providing weather protection in the gap between two high-rises.  Three stretched beige sails form a pattern by alternating directions and look striking next to the vibrant colours of the cafe, helping it to stand out amongst the concrete facades. 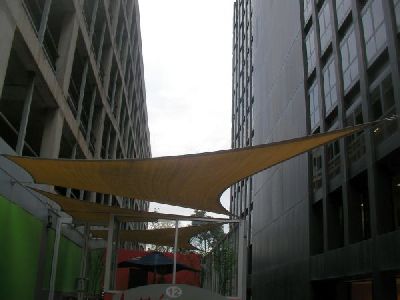 Compare also to our custom made hospitality Shade Sails and cafe shade solutions.

This one is interesting, a Shade Sail over a dumpster in a laneway next to an office building on St Kilda Road. Obviously shading the rubbish helps minimise the smell… 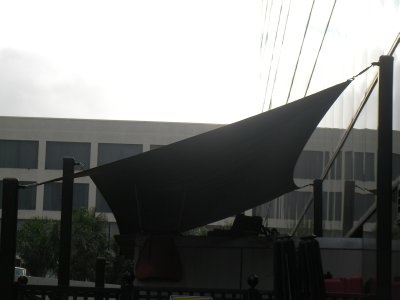 The next nearby Shade Sail design also on Queens Lane is closer to St Kilda behind a residential apartment building we covered in another post.

At 1800 Shade U we build solutions as good or better than these.

We also service the entire metropolitan area, to the outer fringe and beyond into country Victoria, Australia and export to the world!